Brendan's February Post: 204 points of all beef no fluff 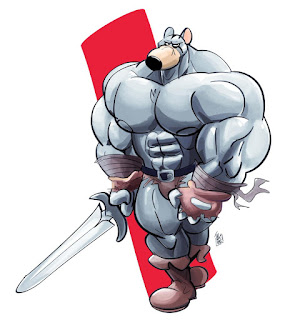 For this month I decided to literally bulk up my Skaven for the month of January.  I mean, no one really fears a bunch of giant rats and swarms.  But rat ogres on the other hand?  Yes please! 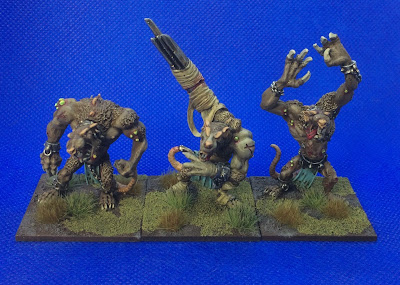 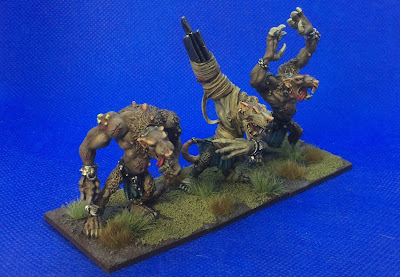 I have 6 planned to paint but figured three would be a good start.  And to make sure that these heavy hitters follow orders, I have a couple of pack masters to keep them in check.  144 points including their rat ogre friends. 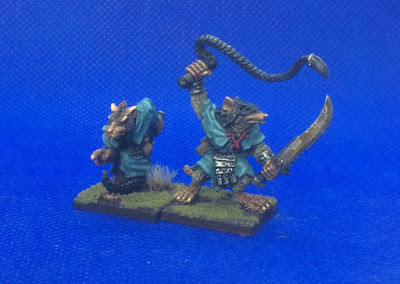 Finally I added a handful of clan rats to reach the required 200 point limit.  They will form a squad of 20 when all is said and done.  So a good dent into a squad! 8 clan rats- 60 points. 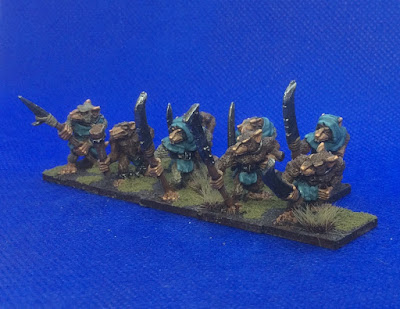 Finally, the February group all assembled together: 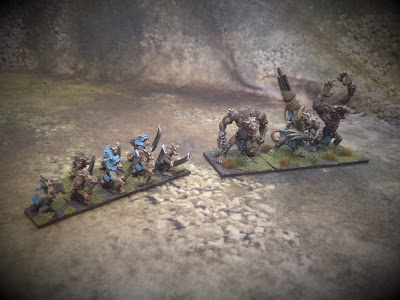 And my total army so far: 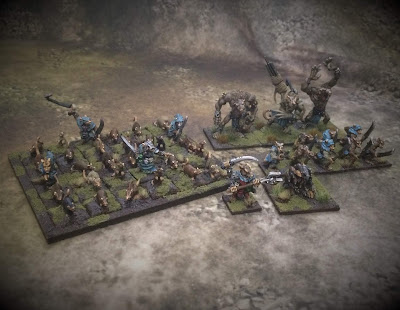 For my second installment in OWAC III, I present a unit of 10 Dark Elf crossbows with level 5 champion, a Giant Scorpion and a Level 10 Wizard. 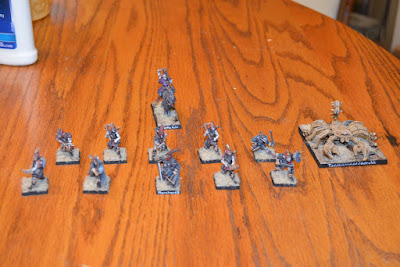 The crossbows will be used as skirmishers to support the unit of Shadows I painted in OWAC II. The champion will get magic projectiles of some kind so he can help remove pests. 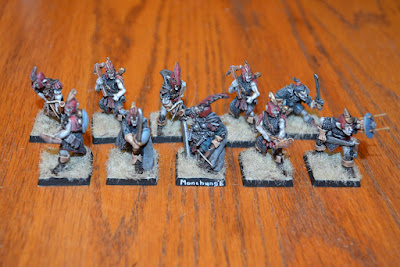 Another bug. What can I say, I have painted one during each OWAC so far, so here is another. I still need to add two more to have the five required for an attached host of Giant Scorpions. 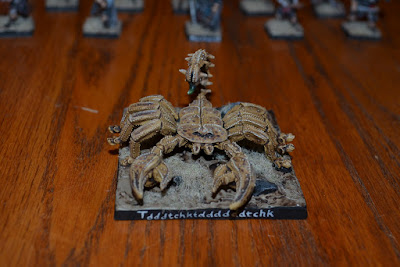 And finally, although not in my original plan for this challenge, I had to add a level 10 Dark Elf Wizard so I can actually bind a host of giant bugs to my army. So here is my first magic launcher. 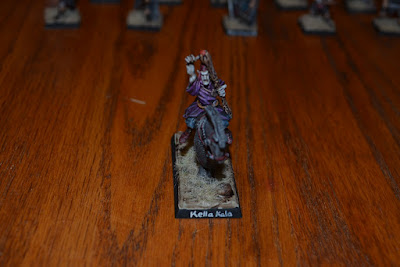 So, another entry in, four more to go. Hope the Jack supplies last long enough...

Month two sees me put off finishing the rank and file chaos dwarfs I had planned, and start afresh on what proved to be a super enjoyable painting experience!
CHAOS DWARF BULL CENTAURS
I loved it!

Assembly was a bit of a nightmare. I used Gorilla two part resin glue to stick the two halves of the body together, drilled a hole in the torso and the body for a pin, and then some more resin to glue the two together, and milliput to plug the worst of the gap-age (although it wasn't too bad to be fair).

Contrast paints were used everywhere again - apart from the base. Here's a quick breakdown, although I'm afraid I don't have any pictures:

I pumped for all black hats instead of the blue/white split, as these guys are extra darkside.

Here's a pic of the finished bulls :) 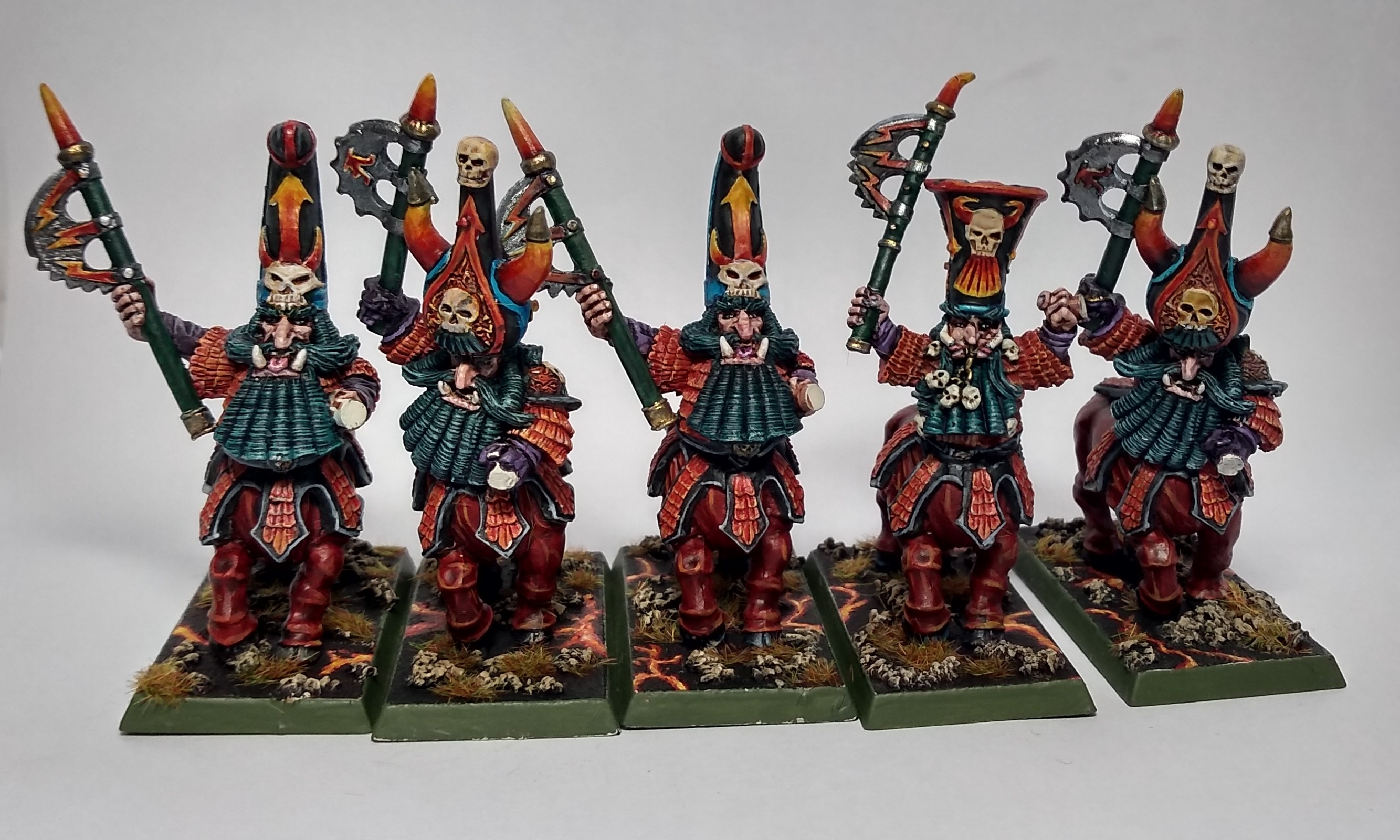 I did tease that I was painting these bulls on the ChaosDwarfsOnline Facebook page. Here's the picture I posted: 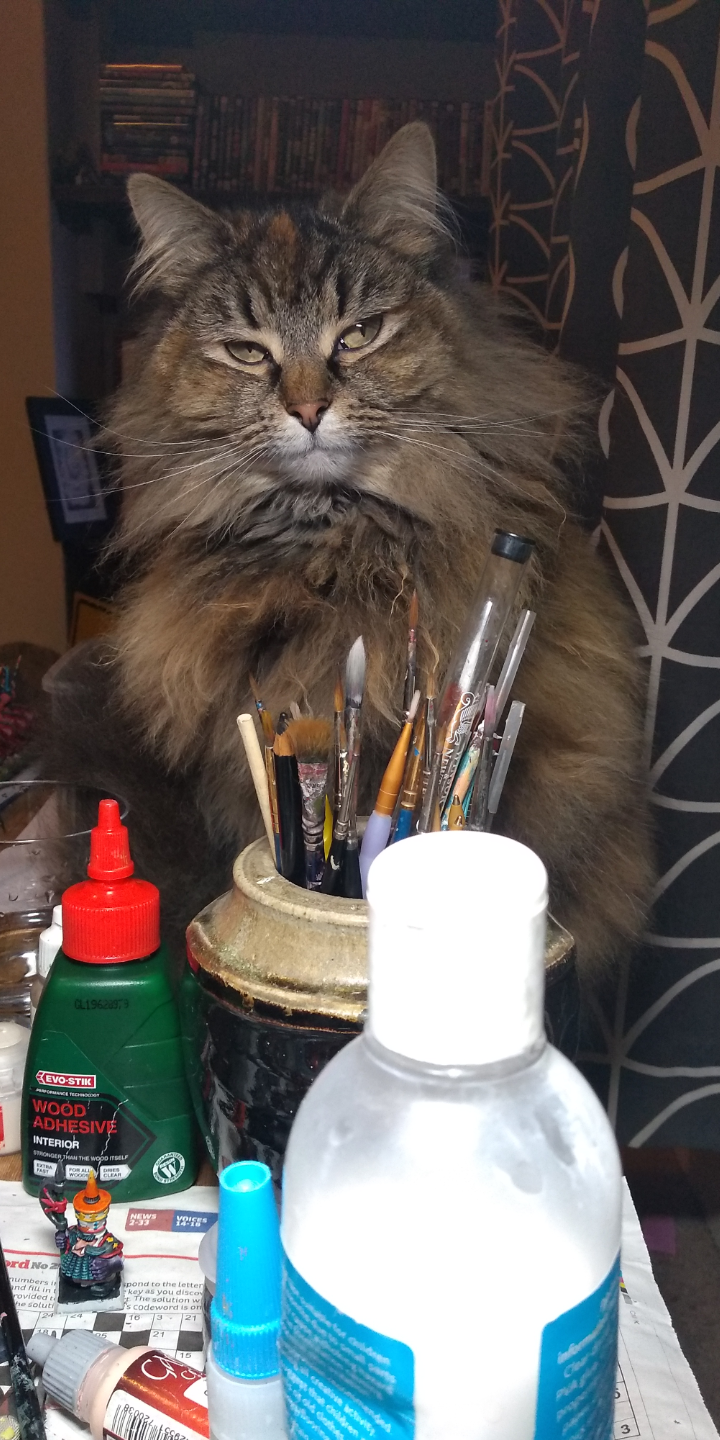 You can just about make out their tails to the left of the red glue top - the warror was just a red herring :)

Here's the individuals - although there are two sets of twins..
The standard bearer and the guy on the far left are on the painting table to be finished, but I'm just plodding around them for now... 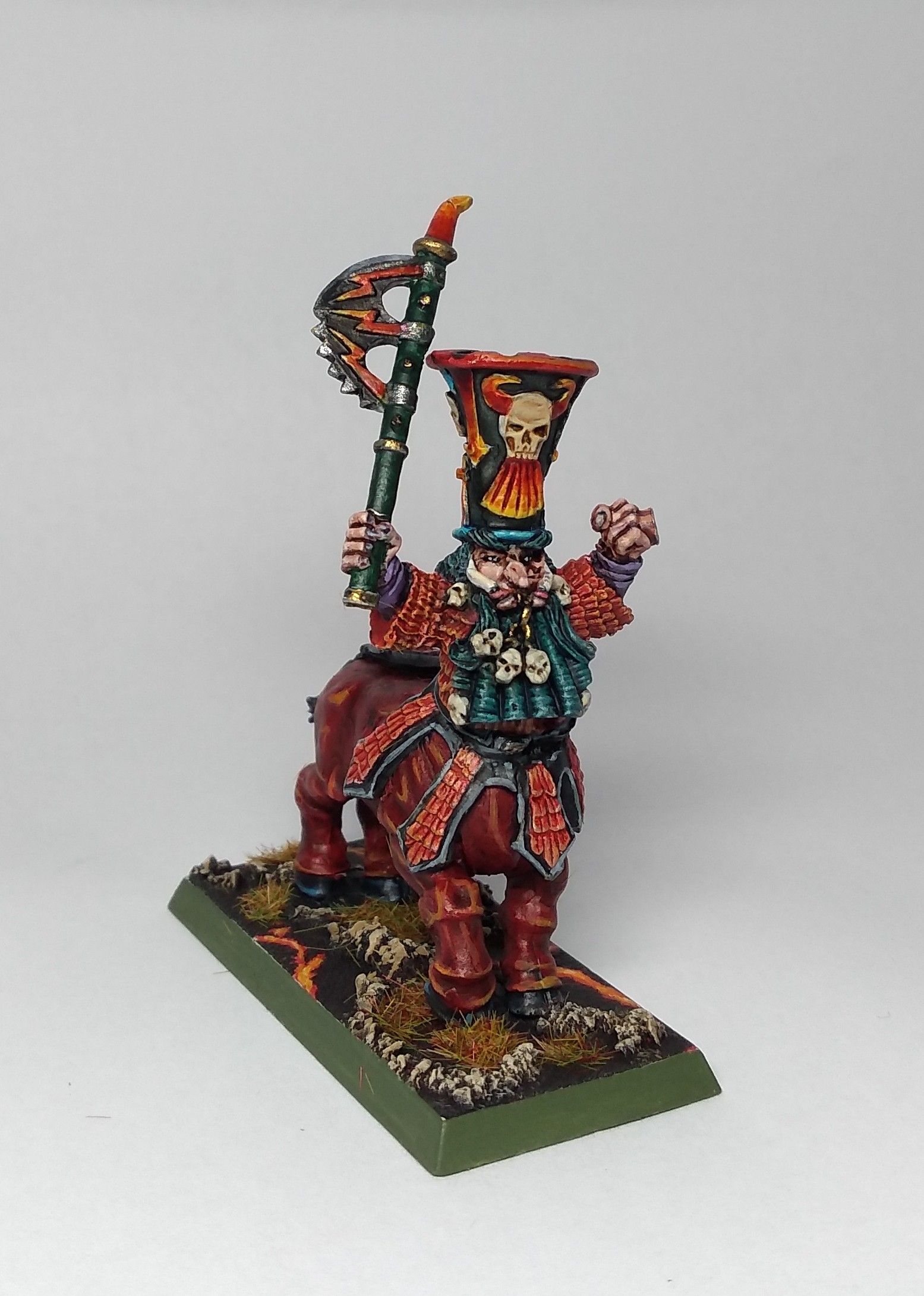 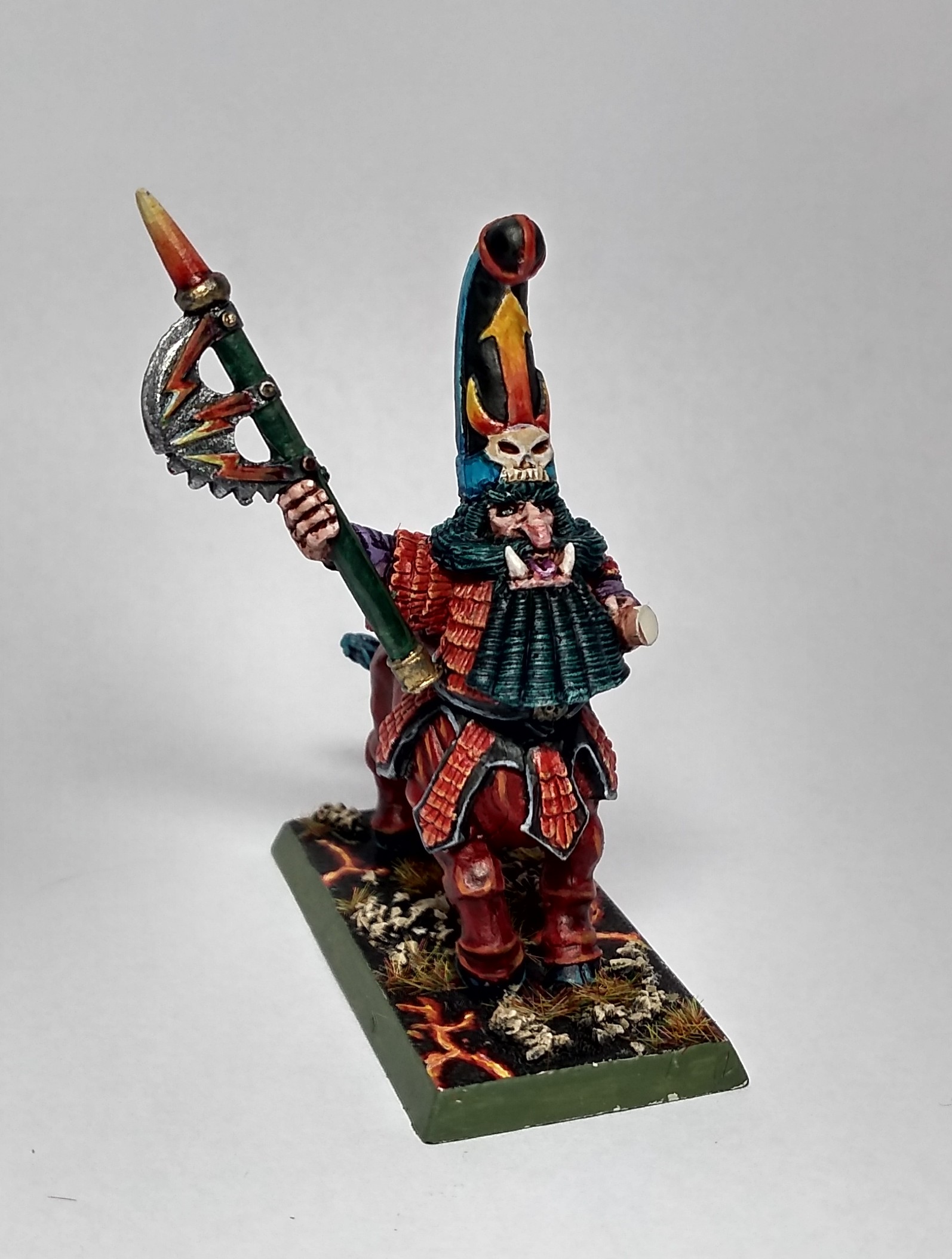 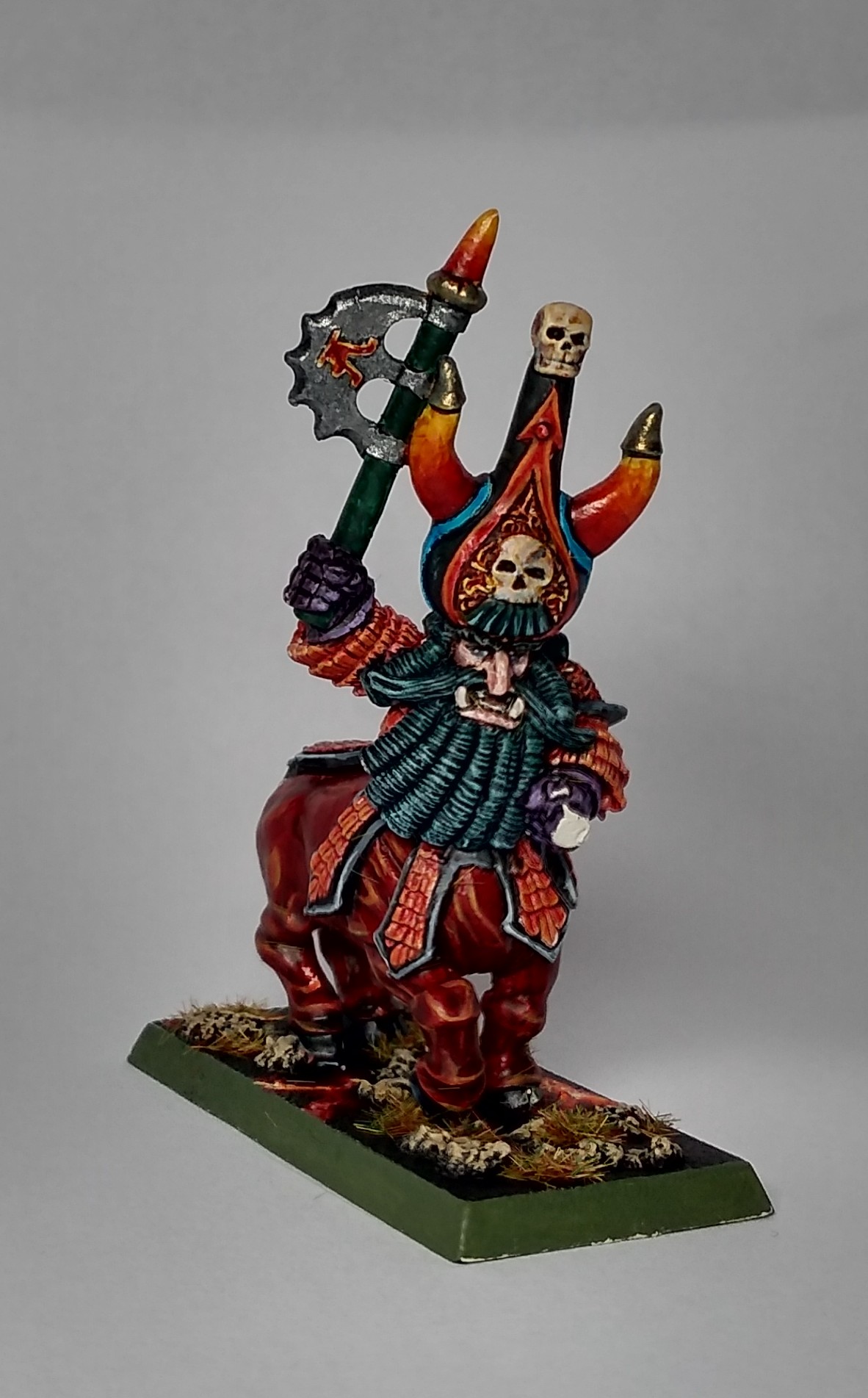 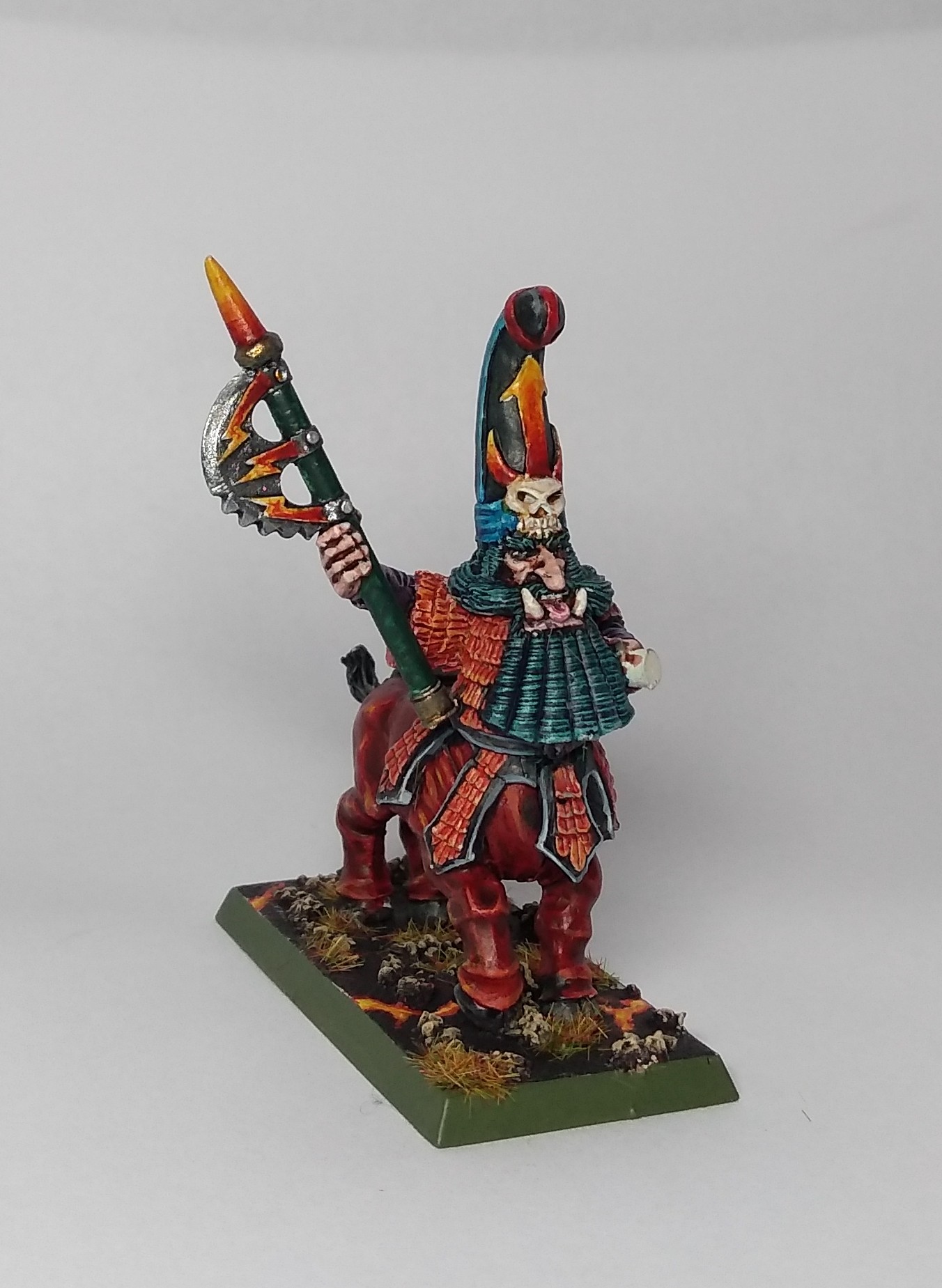 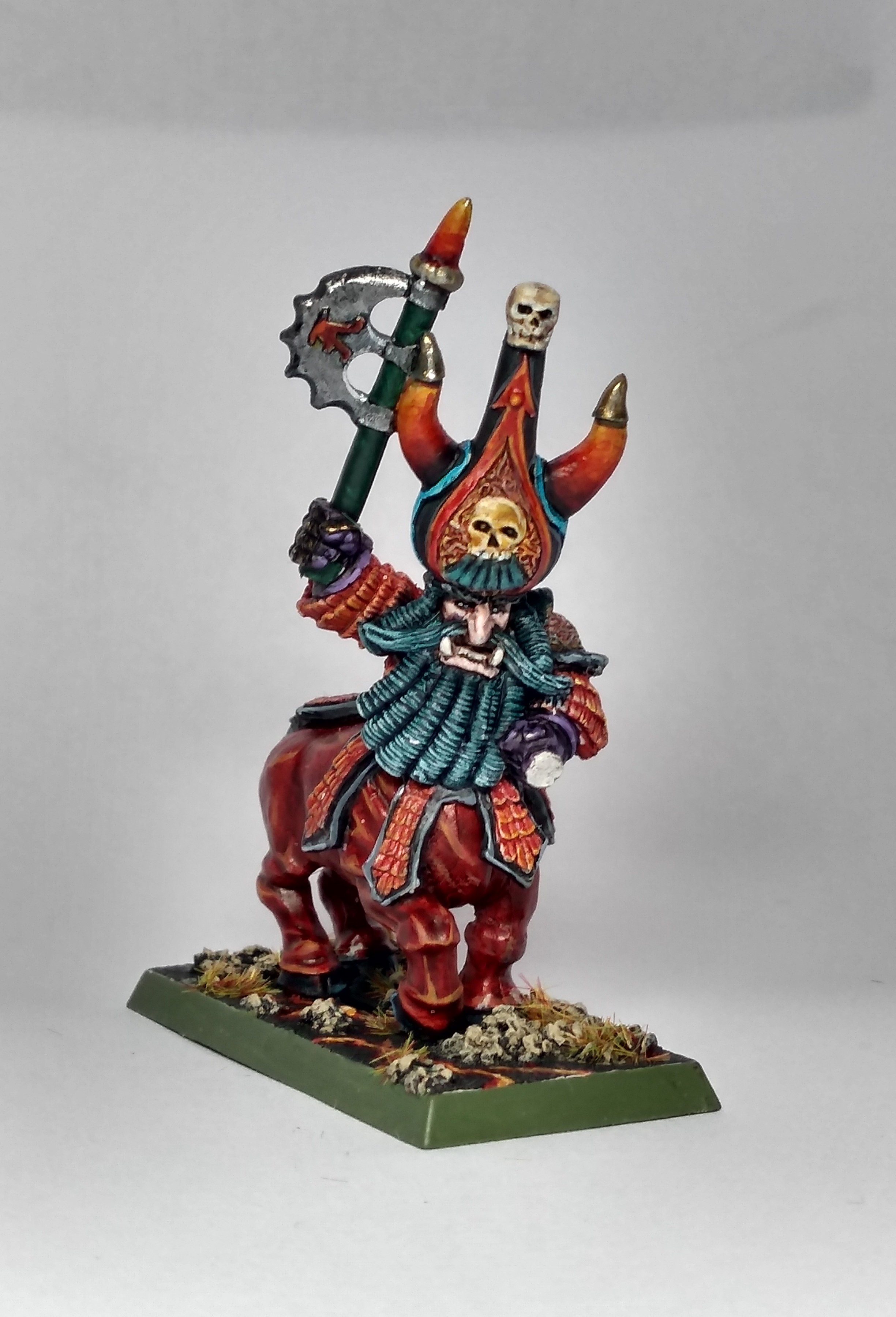 That there completes my months quota. At 40 points each they total a nice neat 200points :)
With such a small model count this month, I hope to be able to paint up a few more EXTRAS for March, although to be fair I do have a weeks holiday planned... anyway, speaking of extras:

In keeping with the bull theme I did also paint this GREAT BULL TAURUS - as alluded to in my sign off from last week :) … 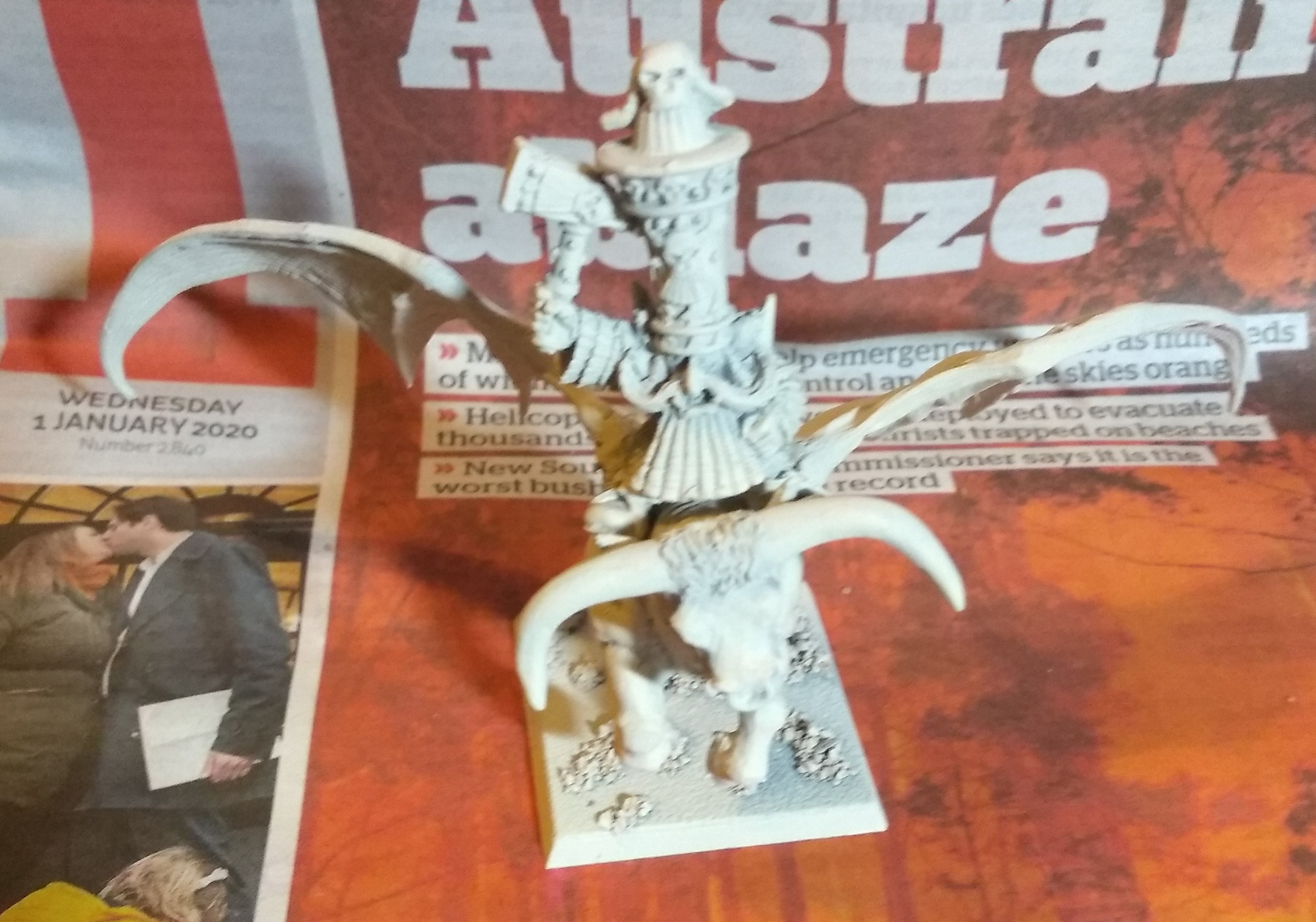 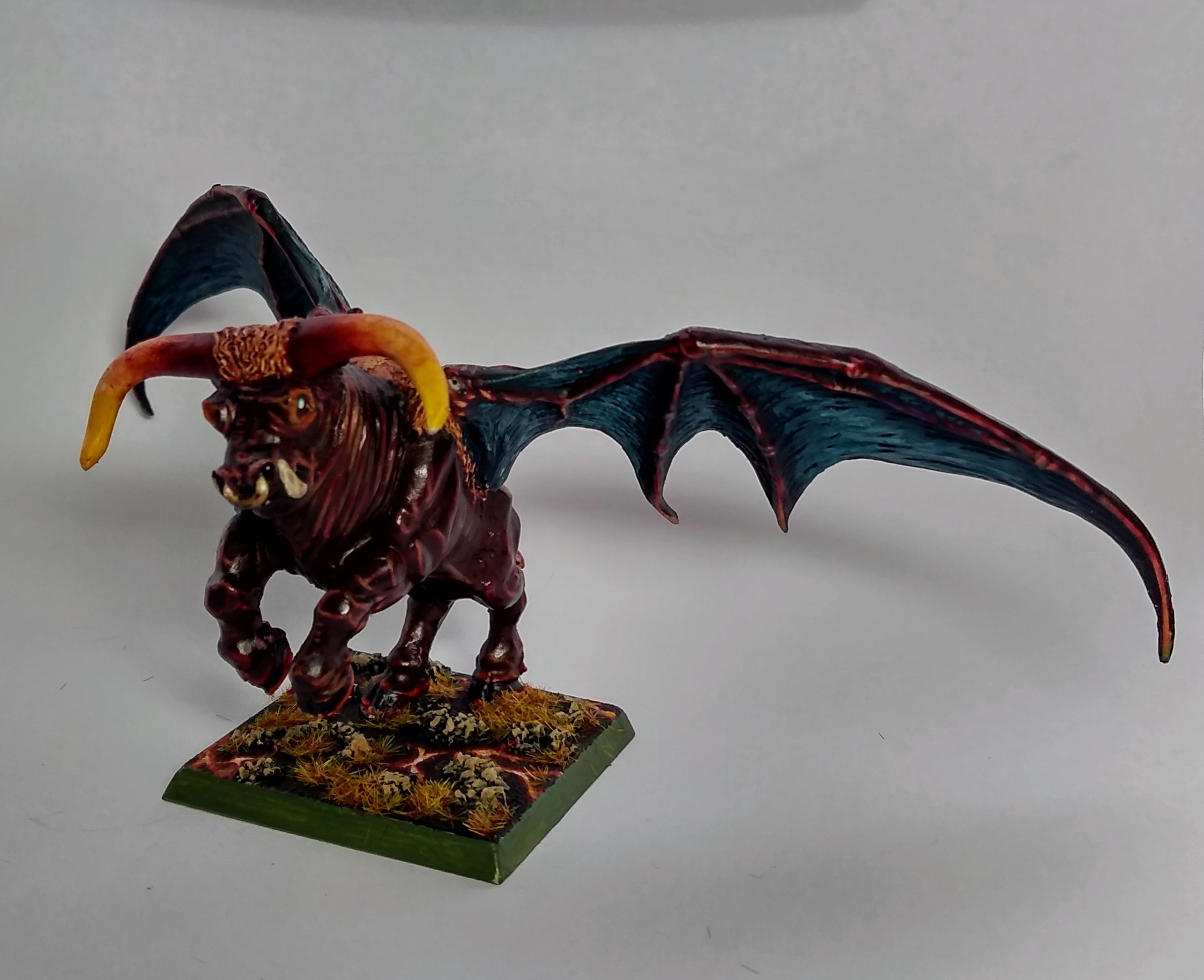 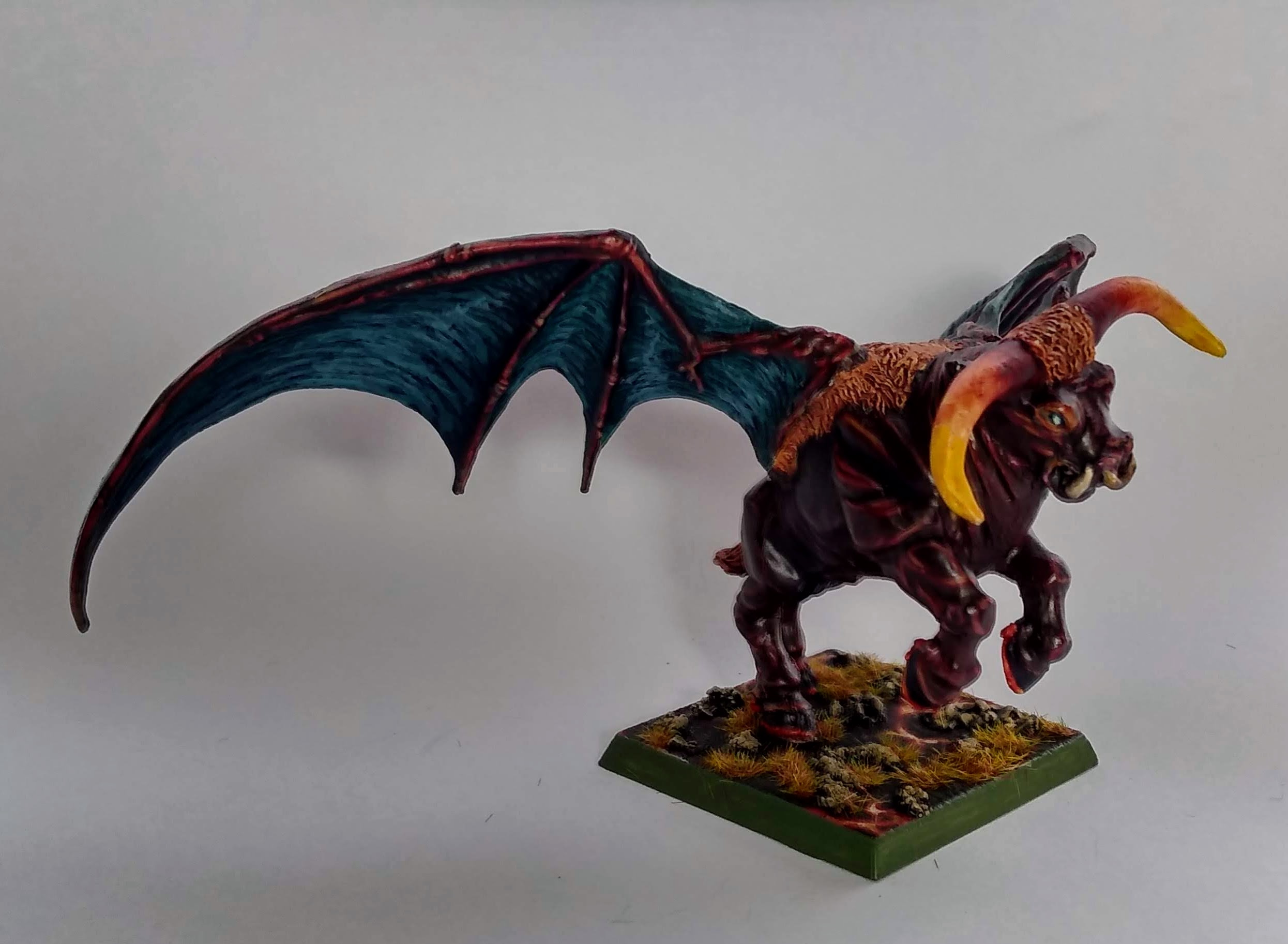 I had to do a little milliputting along the wings. They are held in place with the two part resin glue, and the head is pinned. There's a little pin hole made on the neck, ready for the rider... 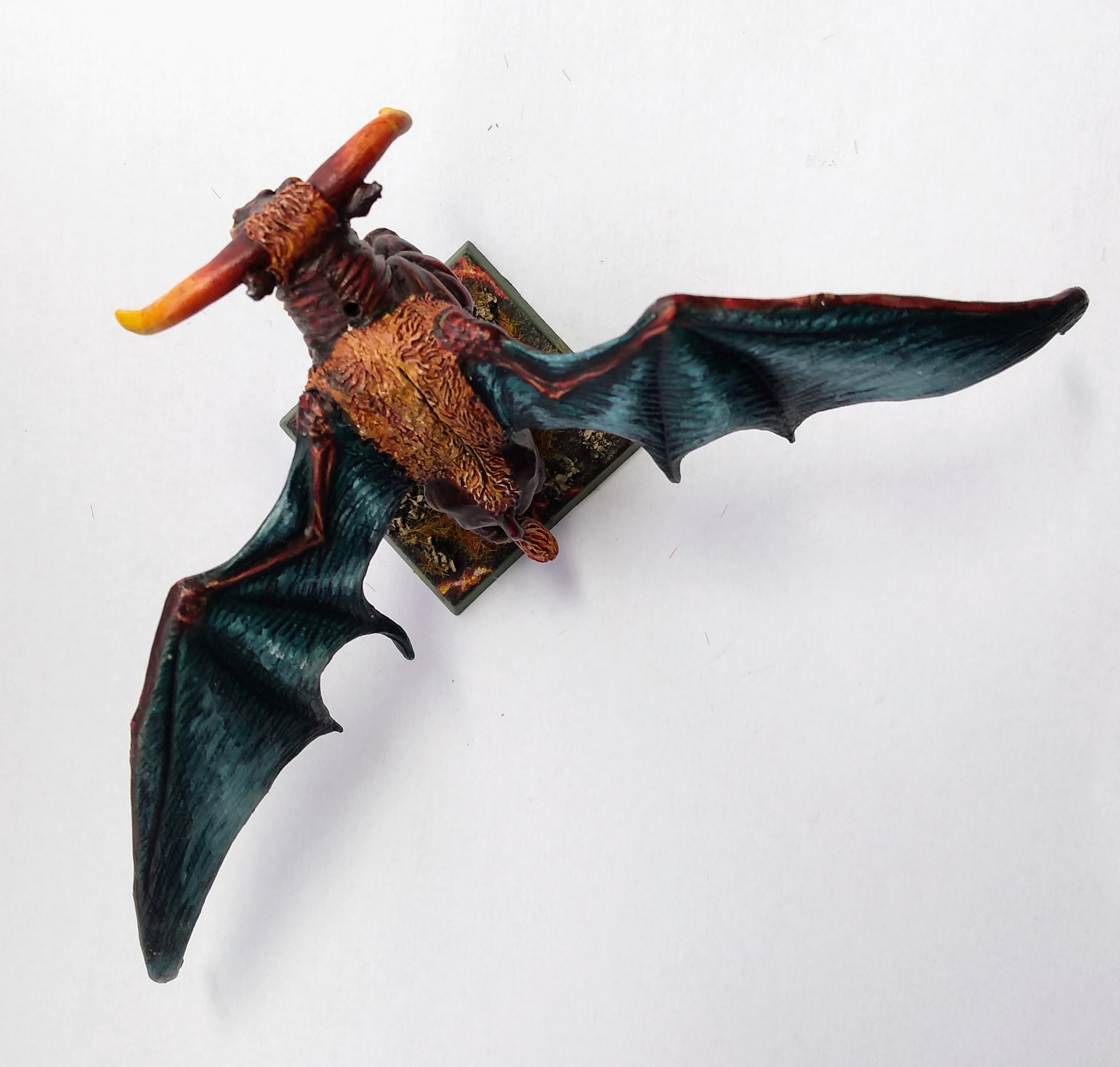 Speaking of a rider - here he is! 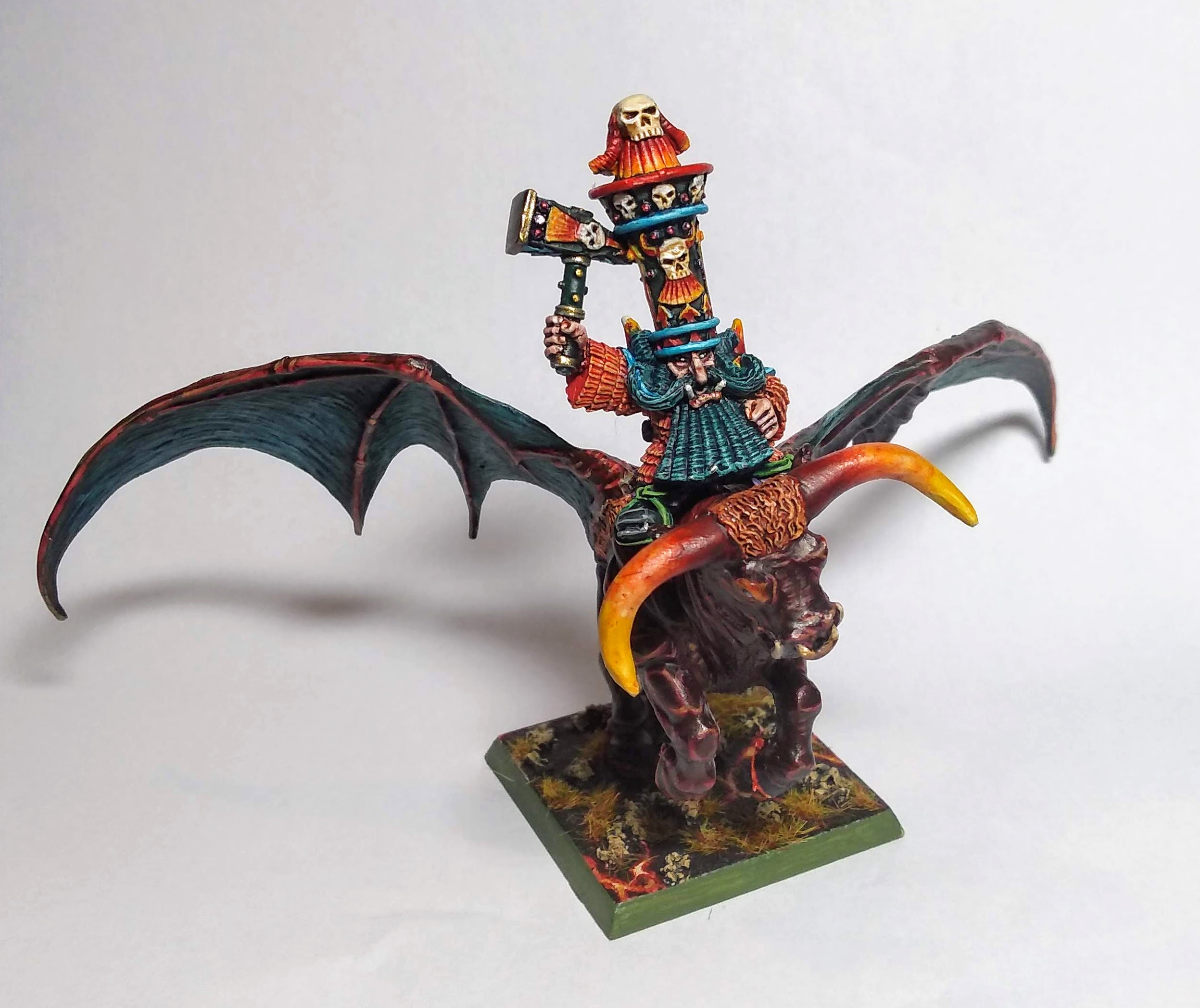 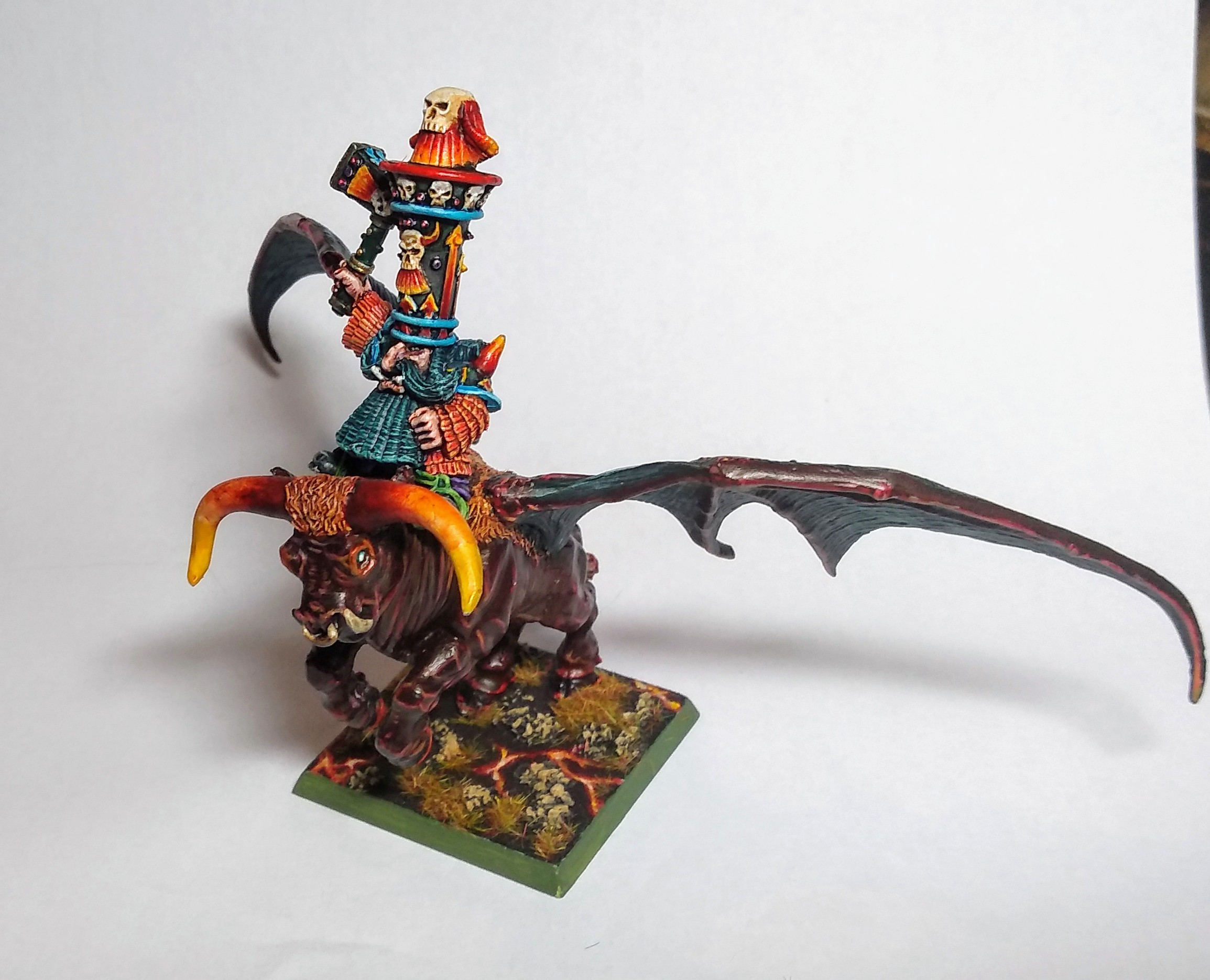 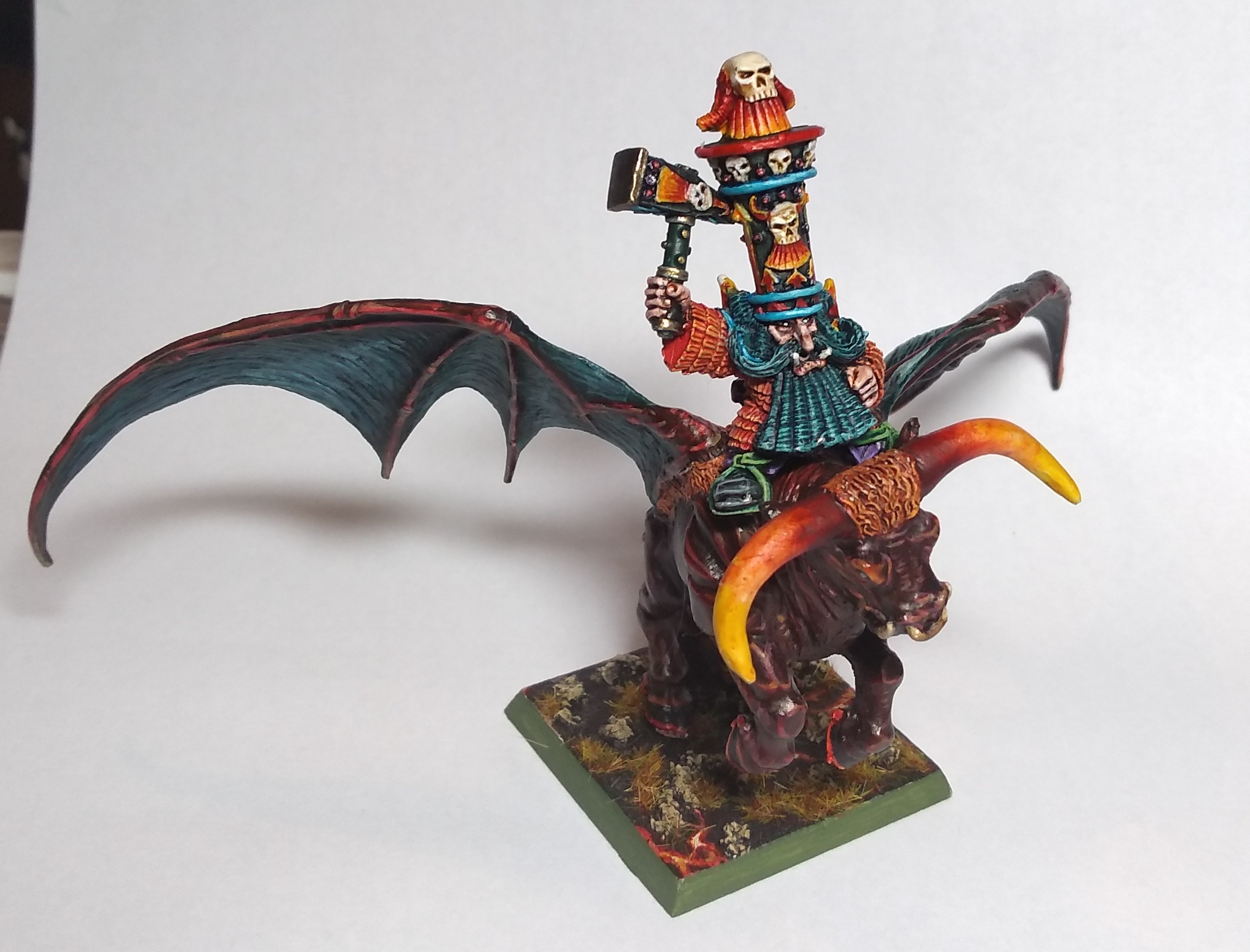 I think one of the photos has been 'autocorrected' on my phone btw... The lighting is better this time around, I must've angled the light right! Again, my photos are usually hurriedly taken, generally whilst there's still some wet paint or glue around. I balance a lid or a flat magazine on to of all the paint sta... Actually, here...here's a pic. This is it in all its glory: 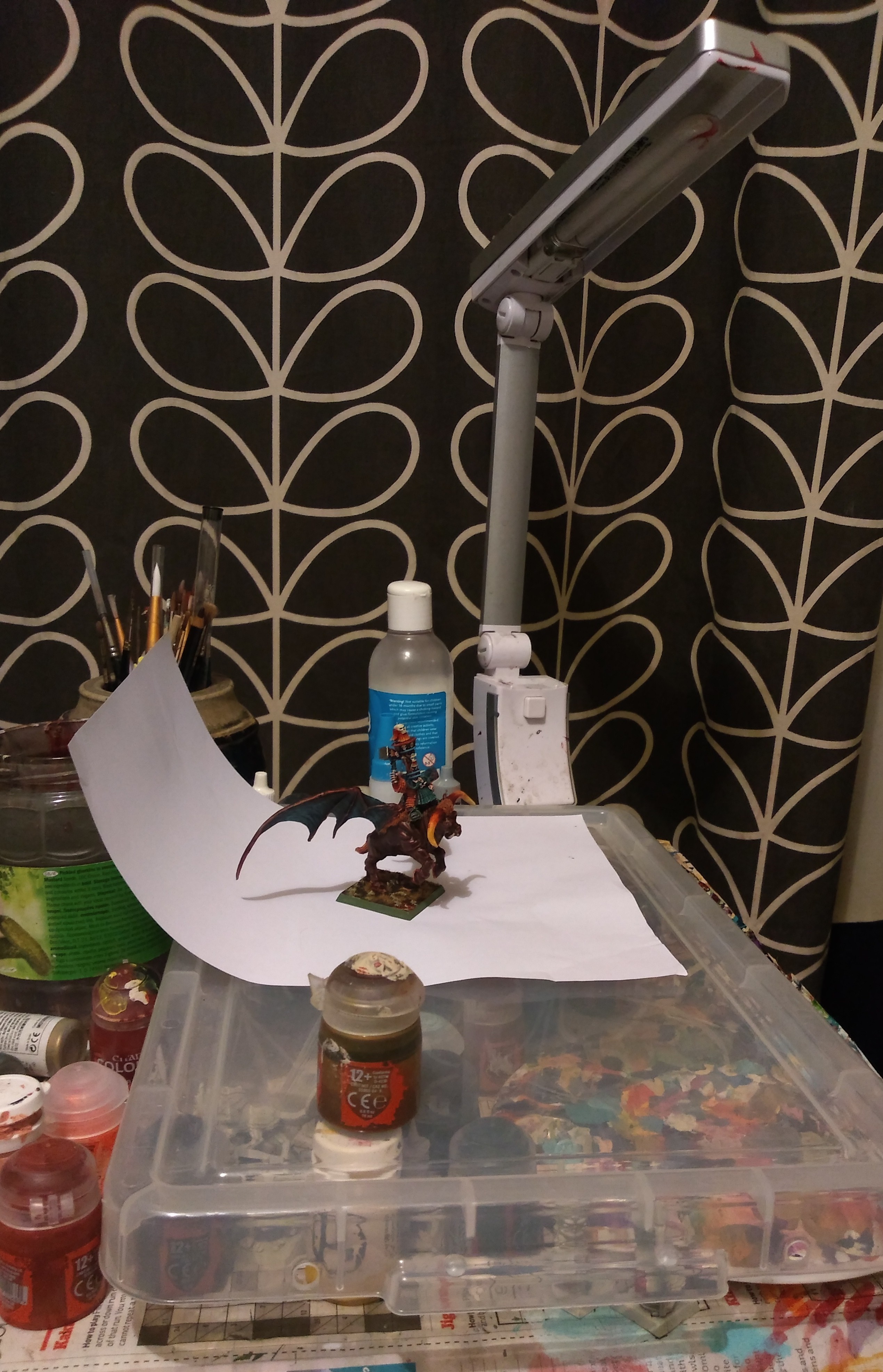 I just have to angle the painting light with one hand and click away with the phone camera with the other...

Anyway:
"Shields!", I hear you cry, "What about the shields?"
They'll be done at a later date (I hope). I do have them, but I've neglected to undercoat them and it's been either too wet, too windy or too dark!
I did think about ordering some oldschool shields with a sculpted face for them (from the excellent Knightmare Miniatures, LINK, Greenskin Wars range), but I will stick to the plain shields as I need to use what I've got, rather than buy more metal.

The rider is missing his banner, I know. I do not own the proper pole for him, but maybe I could fudge one out of a rogue skull and some wire. I might wait and see if he stands out without it first though.

Yup, I think that's all for this month. It's been a great, enjoyable month of painting, although I am feeling the drudge of the rank and file right about now so hopefully painting a few Chaos Dwarf oddities first will pull me out of the rut.

Cheers y'all - see you in March - if the winds blow right :)

For the second month of the OWAC III, I've followed an easy path: a regiment of only 10 miniatures, the noblemen who decided to join Pieter the Pious's quest.

Among the Citadel F2 Fighters and F5 Paladins ranges, I've tried to pick models with a crusader look, complemented by warrior priests. The only conversion made here is the standard bearer: I've simply replaced the left hand holding the original lamp of Sir Osram by a standard coming from an Empire plastic sprue (can't remember which one) and topped by a Black Templars relic.

For the painting, I have used a very limited palette to unify the models, starting with the flag, borrowed to the Knights Templar. The beige tones are made with a mix of white and VGC Heavy Brown, shaded with VMC Flat Earth and The Army Painter Strong Tone wash, and highlighted with VGC Bone White and VMC Ivory. The black tones are even simpler, with a base of VGC Heavy Charcoil, highlighted with VGC Bone White, and shaded with VGA Black or a mix of VMC Dark Sea Blue and Mahogany Brown. The red tones are more complex, with a mix of VMC, P3 and Andrea references.

To summarize, we have:
TOTAL: 205 points
And by order of painting:

And the family shots: 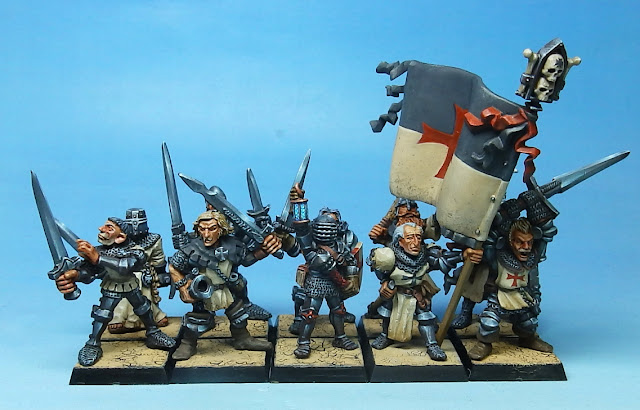 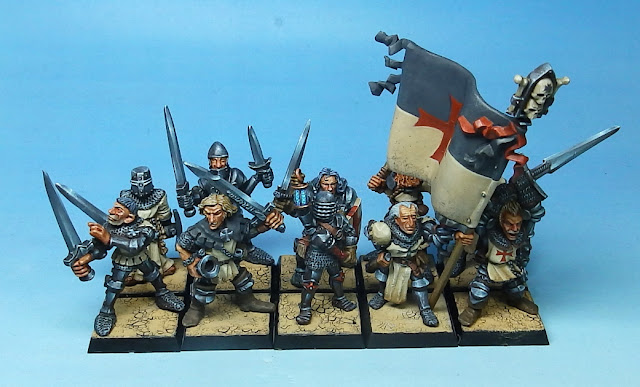 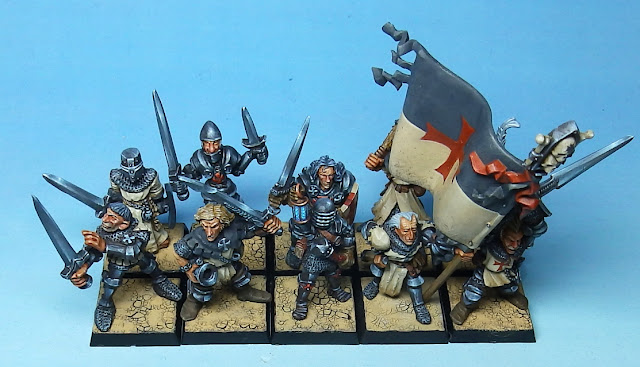 The Fantastic Art of Lissanne Lake

The Field of Bones (the Fallen)

The blogs of the Challengers